The World Day of Remembrance for Road Traffic Victims (#WDoR) is commemorated on the third Sunday of November each year – to remember the many millions killed and injured on the world’s roads, together with their families and many others also affected, as well as reflect on the tremendous burden and cost of this daily continuing disaster.
FEVR is proposing since more than 10 years now the slogan which is related to one of the Pillars of the UN Decade of Action for Road Safety: The slogan for this year’s slogan of the World Day "Life is not a car part" relates to Pillar 3 of the Global Decade of Action: Safer vehicles & Mobility. In addition, it accords with the general theme of the 3rd Global Ministerial Conference on Road Safety that will take place in Stockholm in February 2020 – “Achieving Global Goals 2030”.
Road victims established this day: Brigitte Chaudhry, former FEVR president and founder of RoadPeace (UK), came up with the idea in 1993 which was than supported by all FEVR members. From 1995, Road Victim Advocacy NGOs under the umbrella of FEVR, observed this Day – first as European Day of Remembrance, but soon as World Day when NGOs from South Africa, Argentina and Israel joined.
18. November 2018 we celebrated WDoR 25th Anniversary - 25 years WDoR


Official WDoR 2019 posters
Join us by using the preferred poster in the languages provided or translate it to the desired language for promoting your WDoR 2019 event online or in printed versions. When posting on social media use hashtags #WDoR2019 and #LifeIsNotACarPart and tag World Day of Remembrance.
Official WDoR Social media:
Facebook
Twitter
Instagram 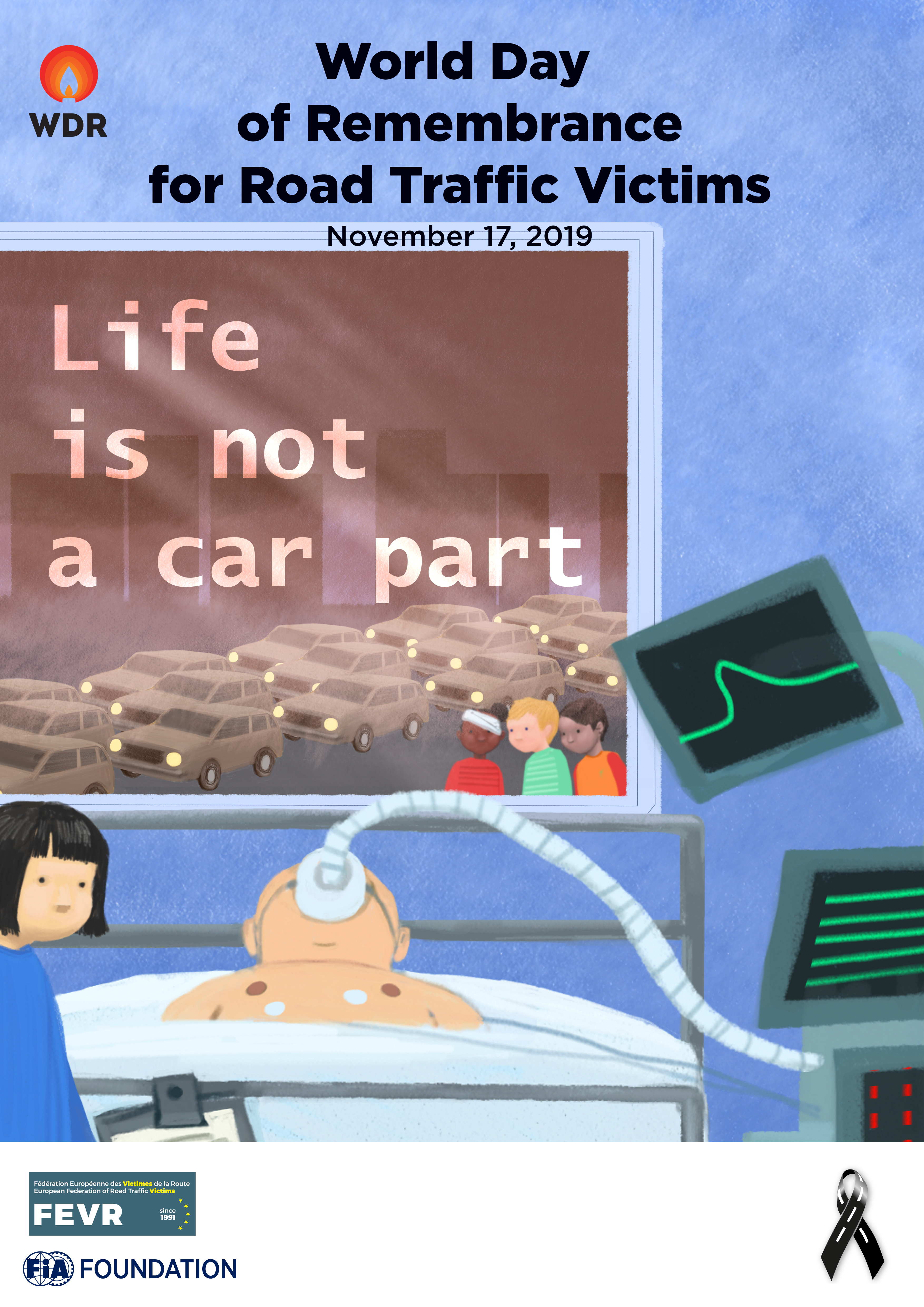 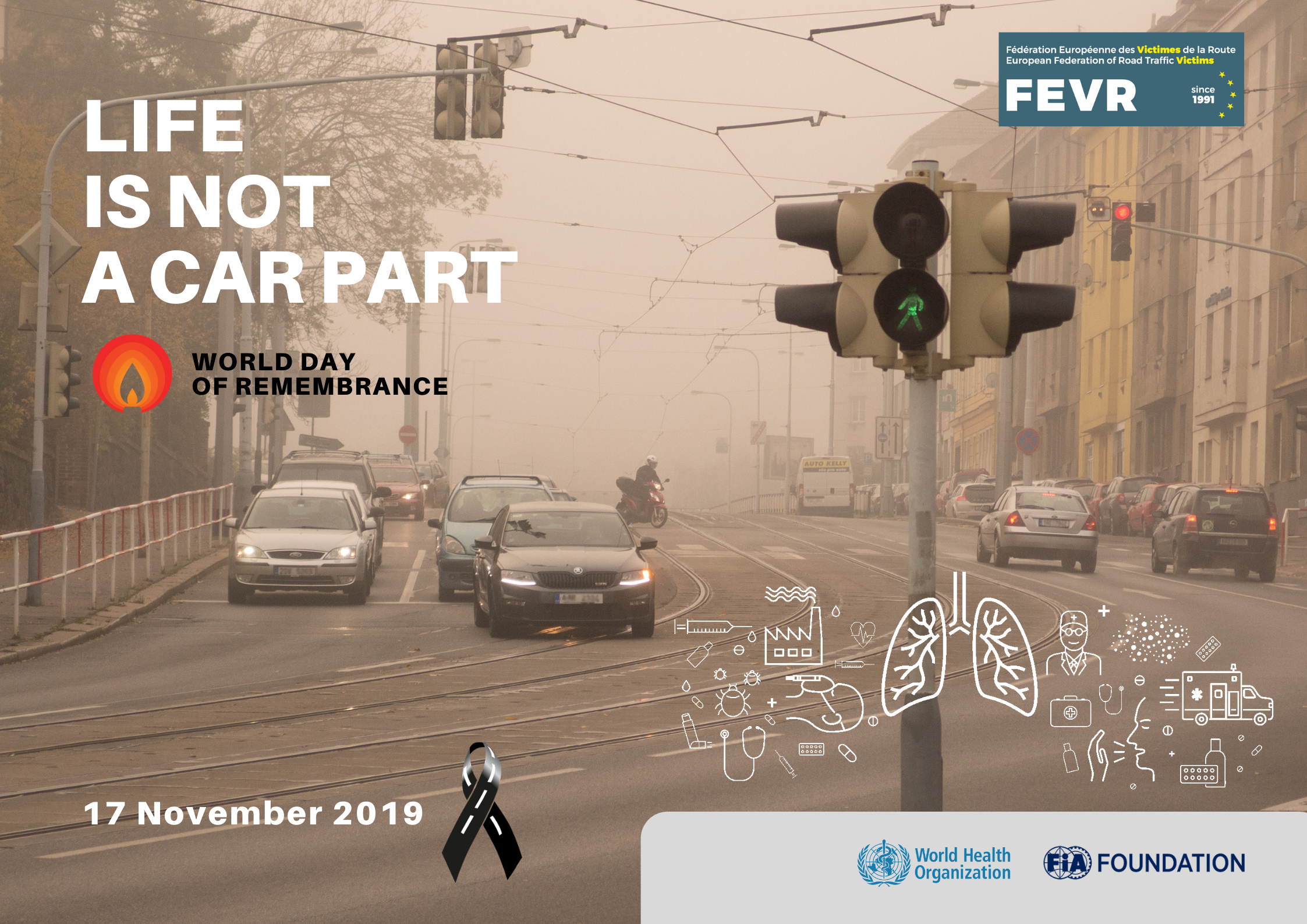 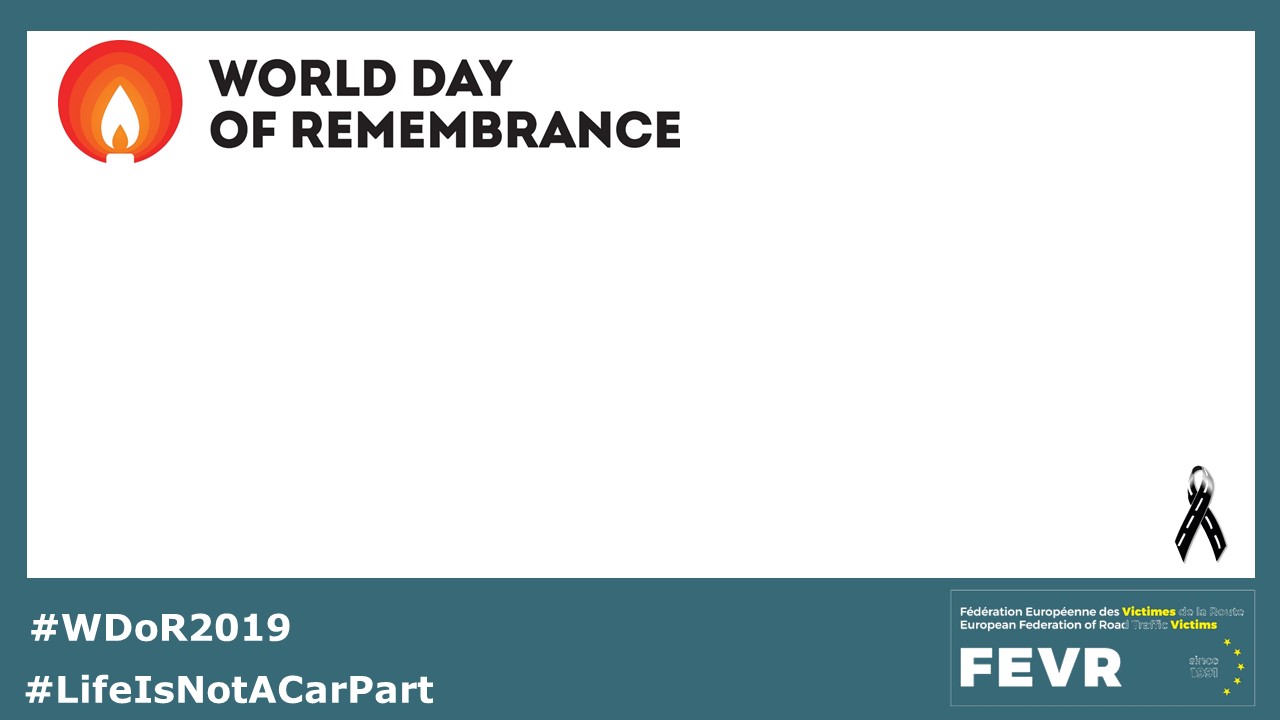 Official WDoR 2019 banner whit blank space can be used to translate the slogan into your language or dialect; in this way, the message not only will reach more people of your country or region but also it will become clear to what extent road crashes and air pollution affect every corner of the world.
Join us by using the official banner with blank space. You can add your logo and print out the banner and write in the blank space your translation of the slogan or your message, take a selfie with the banner and share it on Social media. Don’t forget to use hashtags #WDoR2019 and #LifeIsNotACarPart and tag World Day of Remembrance on Facebook, Twitter, and Instagram.

Official WDoR 2019 video (by Lucy Pepper) is available in English, Spanish, French, Portuguese.
Join us by using the official video for promoting your WDoR 2019 event online on Facebook, Twitter, and Instagram. When sharing the video on social media use hashtags #WDoR2019 and #LifeIsNotACarPart and tag World Day of Remembrance.

Wish you successful WDoR 2019 events and remember to share them with us!