The World Day of Remembrance for Road Traffic Victims is commemorated every year on the third Sunday of November. Created in 1995 by the European Federation of Road Traffic Victims, FEVR, was later officially adopted by the United Nations General Assembly Resolution in 2005. Today “WDoR” is a worldwide international and national day dedicated to the remembrance of the many millions of road traffic victims all over the world.

The 2021 year  celebrations mark the start of the new Decade of Action for Road Safety 2021-2030, during which the World Day plays a very important part.

The main event took place r in Italy, together with the Italian association (FEVR member) AIFVS. The event was entitled “A light in the darkness of pain” and was held in the grandiose and magnificent Hall of 500 of the palazzo Vecchio (Old Palace) in the centre of the city of Florence. On behalf of FEVR, the president Filippo Randi officially paid homage to those who are no longer with us.

Sunday 21 of November in the Palazzo Vecchio Salone dei 500, at 10 am The Family of the Gonfalone started the event with the clarines, manifestation that for a few years the Italian State recognizes, on the third Sunday of November, as National Day of Remembrance. After the entry of the Gonfalone Family, the funeral song “A light in the Soul of Pain” was read with musical interludes by Maestro Luciano Manara. Two works by the great Maestro were exhibited as choreography for the funeral song Antonio Manzi. After the reading, the president of the City Council Luca Milani made the honors of the house. Then, the interventions of the Deputy Rosa Maria Di Giorgi and the President of FEVR Filippo Randi. Subsequently, the trailer of the director Lorenzo Borghini entitled “Strade Interrotte” (roads interrupted) was  projected. Lorenzo Borghini received by Filippo Randi, on behalf of FEVR, a recognition in memory of all road victims.

The official poster of World Day of Remembrance 2021 was prepared and  posted by FEVR on all  official social media materials and highly promoted in internet since one week before WDR.

Please see the poster below:

In the year in which our organization celebrated its thirtieth anniversary, our federation of road traffic victims wanted to give life to the book of testimonies so that those who read it fully understand the seriousness of the consequences of road crime and commit themselves to road safety. We considered significant to publish it on the World Day of Remembrance for road traffic victims, so that memory becomes a proposal for social improvement.

The Book was officially launched in November. It was published in two versions: electronical and paper version.

Please see the book below:

An official animation movie (appr.1:15 ‘) was released. The movie is an animation that contains fragments of the Book of Testimonials, logos of our partners,  fragments of speeches of our Partners, WDR poster and images of monuments of road victims. The movie was released on November and used as invitation to worldwide celebrations and promotion of World Day of Remembrance:

To honor all roads’ victims, during WDR 2021 GRSF aimed to bring forward impactful knowledge, stories and evidence-based road safety guidance, as in publications and tools that may contribute to mitigate this crisis. On November 18, 2021, 8-9.00 am DC time, the World Bank GRSF team conducted a webinar to commemorate those who suffered from road crashes, highlight the World Bank response to this global crisis, and hear directly from a road crash victim on the challenges when involved in a road crash. The president of FEVR took part in the webinar as FEVR speaker, also refering to the Book “Stories to be told. Voices to be heard”. 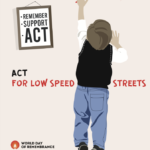