Let´s go to back new vehicle safety standards without delay

On 18th November 2018 we commemorated WDoR’s 25th anniversary. The global theme “Roads have stories”, related to the 2nd Pillar of the UN decade of Action, safer roads and mobility, was spread all over the world. Roads and streets are more than connections from point A to point B. They tell stories, some of them tragic which are worth remembering. Raising the inherent safety and protective quality of road networks for the benefit of all road users is one of our main goals.

Barcelona was the epicentre of this year FEVR’s main celebration. More than 170 people came to the Barcelona Conservatory to commemorate the tragic losts and honour the life. P(A)T was the host and along with their members, Mr. Jean Todt, special envoy of the United Nations for road safety, the Minister of the Interior, Miquel Buch, Mrs. Ada Colau Ballano, Barcelona’s mayor, Mr. Matej Zakonsjek, Head of Cabinet EU Commissioner for Mobility and Transport, Mr. Jeannot Mersch, FEVR’s president and many others attended to the conference.

The event started with moment of silence and presentation of the official #WDoR2018 video. Mrs. Yolanda Domench, the director of P(A)T claimed, in the first place, that victims should not be left alone. Often, all the pain they feel is done in isolation. Many of the victims do not fall under the Statute of the victim of crime. In her speech she spoke about the emotions that emerge after a traumatic and sudden loss, as is the case of a road crash, and highlighted that the figures show a catastrophe of which we are not aware. That is why the commemoration of World Day is important, to give visibility to the reality that exists after a road crash, to call for action to politicians and for victims to feel the support and solidarity of the society. “We accept mobility with a high accident rate, eminently sedentary and polluting. It is urgent to work on the change of values to achieve peace on the roads.”, said Mrs. Domench. In 2018 P(A)T has their 50th anniversary and for a very long time they insist for many things to do to protect all types of people who are affected by road crashes including speed limits, distracting driving, alcohol, drugs etc.

Mr. Jean Todt, UN special envoy for road safety said that today is the day to think about families and to stop the ignorance on the road around the world. “World Day of Remembrance of Road Traffic Victims has been observed for 25 years under the leadership of the European Federation of Road Traffic Victims (FEVR). I take this opportunity to praise FEVR for their dedication and efforts to consistently commemorate lives lost and altered as well as loved ones impacted by tragedies on the roads. It is unacceptable, that we still lose estimated 1.3 million lives on the global roads annually, while the lives of over 50 million severely injured every year are never the same. The impact on their families — in economical, physical and psychological terms — is unimaginable. I highly appreciate FEVR’s tireless efforts to bring attention to the magnitude of the issue and to advocate for adequate support to those affected.”, said Mr. Todt.

The keynote speaker of the event was Mr. Jeannot Mersch, FEVR’s president and bereaved father. “Today we celebrate WDoR’s 25th anniversary here in your nice city, in this place where we can feel music, together with our distinguished guests and especially with you, members of PAT A PAT having its 50th anniversary.”, started Mersch. He shows his deep admiration to Mrs. Brigitte Chaudhry the founder of WDoR and all others who work for and with victims and help reducing the dangers on roads and streets through Europe and the whole world. World day is endorsed through many people and organizations all over the world, and special thanks to Mrs. Violeta Bulc, European Commissioner for Mobility and Transport who is a big supporter and delivers every year a strong message for the WDoR. And he also thanked to the Police, Ambulances, Fire fighters, Doctors and nurses in Hospitals especially today because all of them often have to live difficult moments by trying to help and reduce the consequences, not only physical but also moral suffering. “Today we are therefore sending a message from Barcelona to the whole world where millions of victims commemorate our World Day of Remembrance, feeling the solidarity.”, Mersch said.

Mr. Mersch playing the song “Missing” composed by himself and dedicated to his daughter Sandy who died in a car crash and now dedicated to all Road Traffic Victims.

Mrs. Brigitte Chaudhry, European Federation of Road Traffic Victims (FEVR)’s former president and founder of Road Peace and “mother of World day of remembrance” and Mr. Etienne Krug director of the Department for Management of Noncommunicable Diseases, Disability, Violence and Injury Prevention at WHO delivered video messages. Mr. Rob McInerny, iRAP CEO, Mr. Antonio Avenoso, Executive director of ETSC and Mrs. Lotte Brondum, Executive director of Global alliance of NGOs for Road Safety and Road Victims also delivered special video messages, noticing that each year millions of newly injured and bereaved people from every corner of the world are added to the countless millions who already suffer. The cumulative toll is truly tremendous. This special Remembrance Day is therefore intended to respond to the great need of road crash victims for public recognition of their loss and suffering.

Mr. Matej Zakonjsek, Head of Cabinet European Commissioner for Mobility and Transport said: “World Remembrance Day is a day where we remember those who have lost their lives or have their lives changed forever by a road crash. We all stand in solidarity and respect for no less than 25.000 people only in Europe which are killed on our roads only last year and 135.000 seriously injured, every single year.”

Mr. Manuel Ramos, Chairman World Day of Remembrance for Road Traffic Victims‘Advisory Council added: Designed to be celebrated one week after Armistice Day, the WDR purports to remind the world that another, less visible but equally wrecking catastrophe has been unravelling since years before the first guns started discharging in 1914. What the world’s roads and streets have witnessed, the terrible stories they silently conserve, mustn’t be forgotten or deleted.

A message of Hope, an urgent call to all responsible stakeholders, to every road user, please help us to stop this catastrophe, live with us Vision Zero, coming as close as possible to zero deaths and serious injuries on our and on your roads, here and everywhere. Mr. Vicente Sanchez, president of AP(A)T received Vision Zero certificate. Mr. Sanchez speech was forceful and strong and appealed to the responsibility of the authorities and decision-makers to resign if they don’t have enough level of preparation and commitment to get zero victims.

Representatives of different religious read a text for all tragic deads and candles were lightened.

The Minister Buch wanted to get the message that he does not want more victims on the road. He also added that reducing the victims is a “priority” objective of the Catalan Traffic Service. “The numbers grow, and we do not forget that they are not data, they are people, parents, mothers, children,” said Buch.

The mayor of Barcelona, ​​Ada Colau, has also been present at the event and said that the city council is increasing the zones with this reduced speed limit, as well as other measures that put people “at the centre” of urban policies. Mrs. Colau highlighted some of the actions that municipality has done to “avoid dead ones that are avoidable”. “We do not normalize it. Victims zero is not a utopia, “said Colau. The objective for 2020 is to reduce mortality and serious traffic injuries by 50%.

Ole Thorson, president of P(A)T remarked that it is sad that many people only think about victims one day like today and more taking into account that we have all participated in creating a society where aggression, speed and lack of respect towards the other is more important than the physical integrity of the neighbor, the fellow citizen. “We forgot the hundreds of thousands of accumulated victims who are still suffering the consequences of many daily casualties in our country”, said Mr. Thorson.

The event has been accompanied by Idoia Rodriguez, piano and Néstor Pindado, baritone and Saint Joseph and Oriol chore. René Montiel Casas presented “The Bells of peace” using over toned technique.

Along with the music road traffic victims also gave testimonials. “Fatality does not exist, it is in our hands to break the statistics, recover the look of the child that all adults carry inside,” said Mr. Joan Puig-Pey, father of Pau, who died in a crash. “Today, evoking the innocent regard of my son, Pau, when a child played delicately with his toy strollers and talked to them as if they were people, I found the child inside and I saw the need to make human mobility decisive, in the that the center is the person, more than the vehicle. Pau died three years and seven months ago, at 27, due to the negligent conduct of a driver”.

Mr. Ricard Mauri, whose daughter and son in law died in a car crash, explained that when you lose a young person with a future ahead, you also lose their talents and all the cultural work they could have created, as would have been the case of Ana and Lugan.

At the end The Vision Zero commitment had also been signed by following officials:

In the evening, at 7:00 pm, candles and the temple of Tibidabo himself were lightened in loving memory of the road traffic victims. 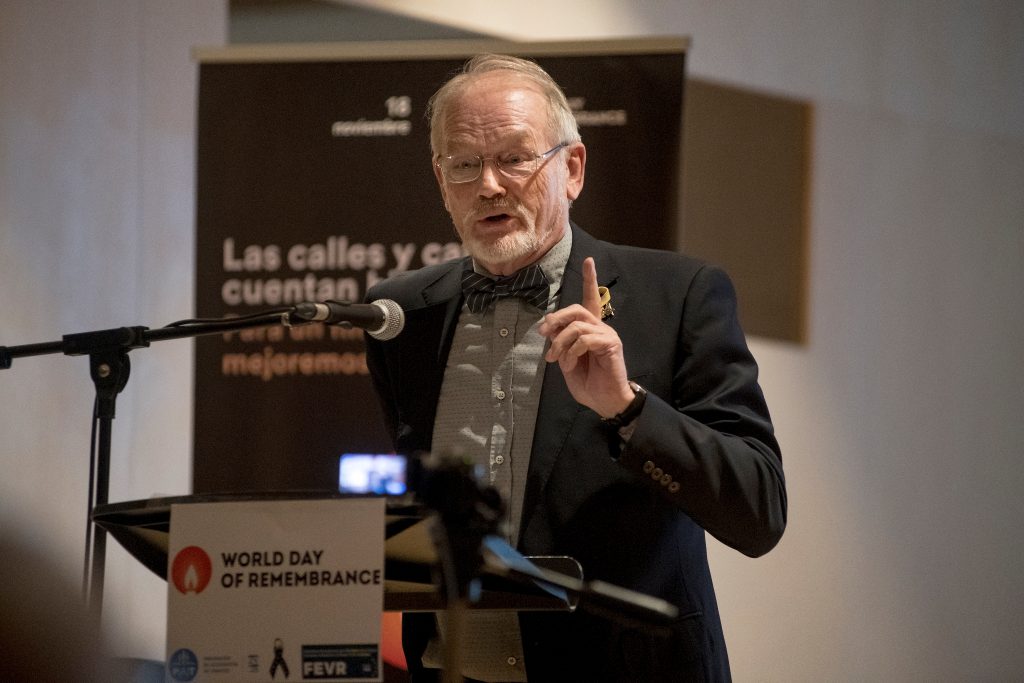 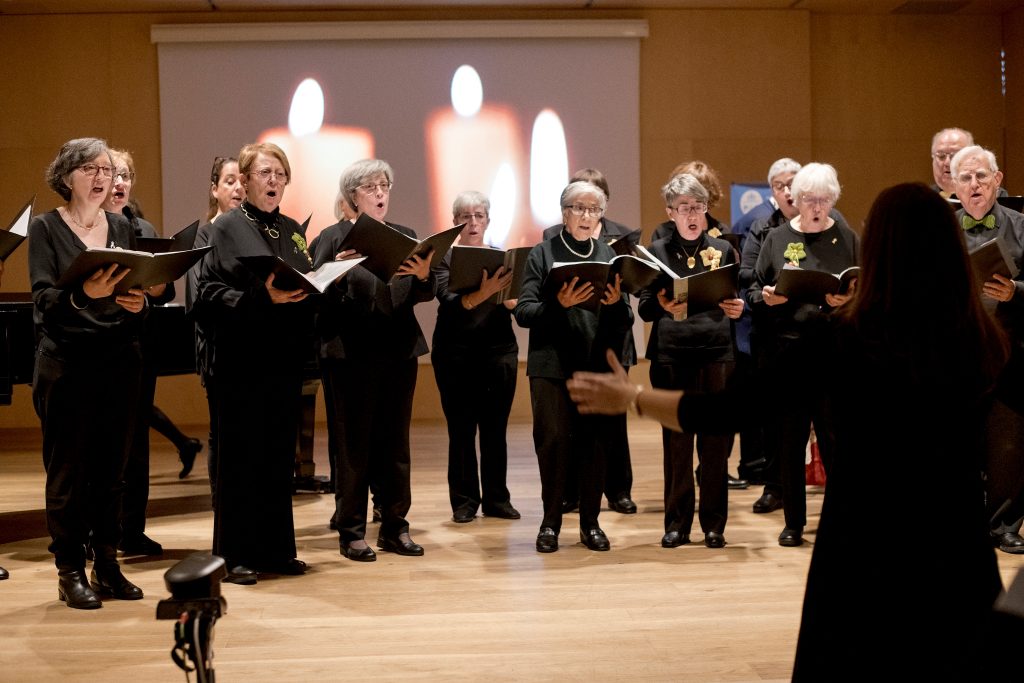 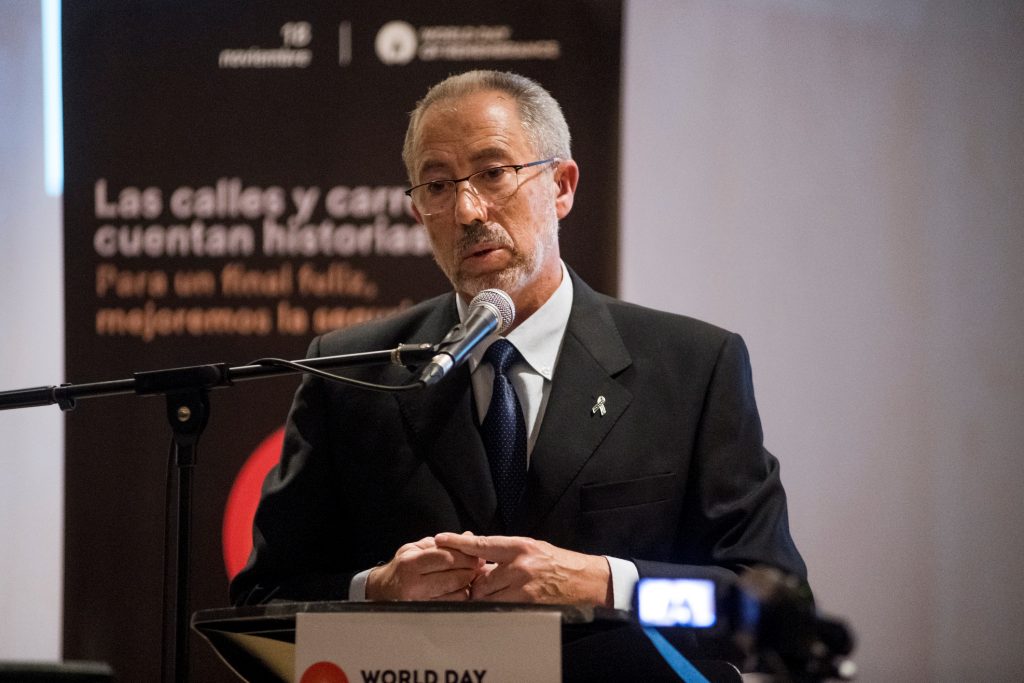 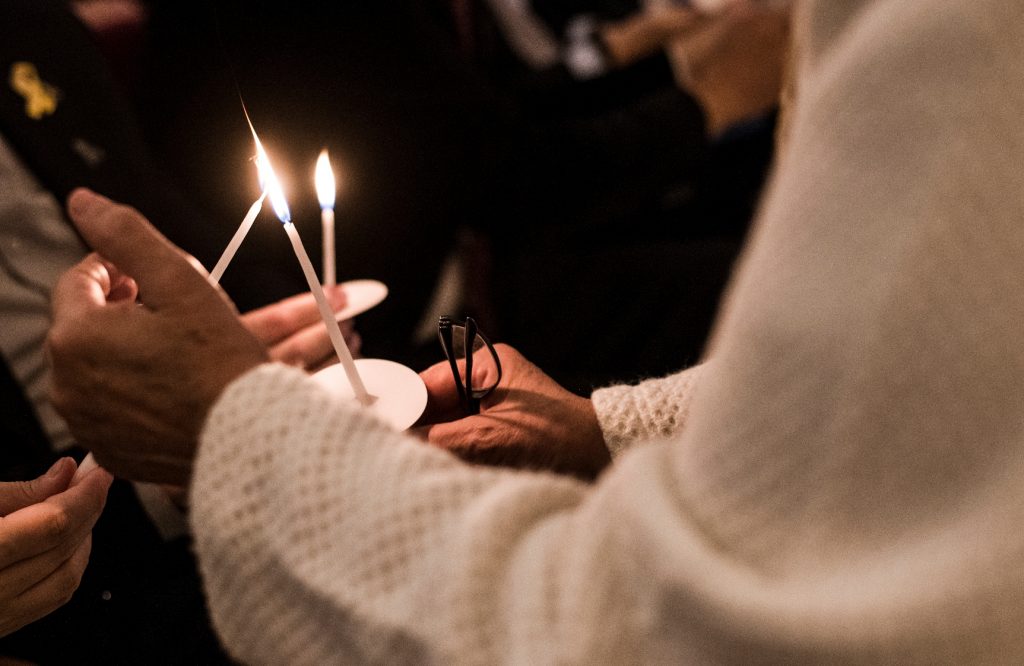 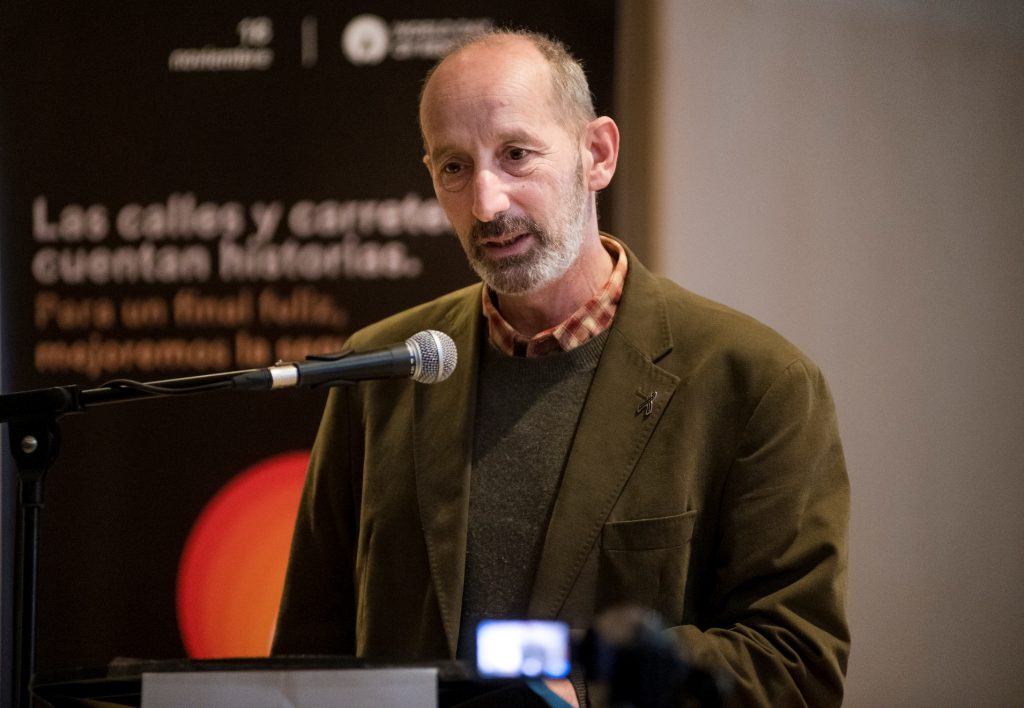 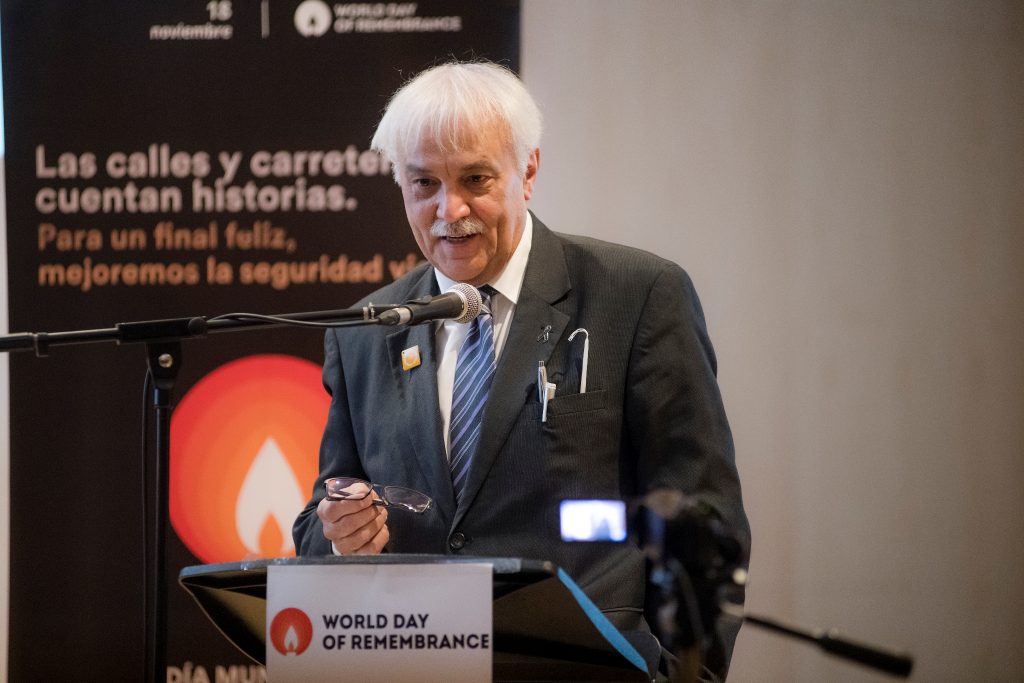 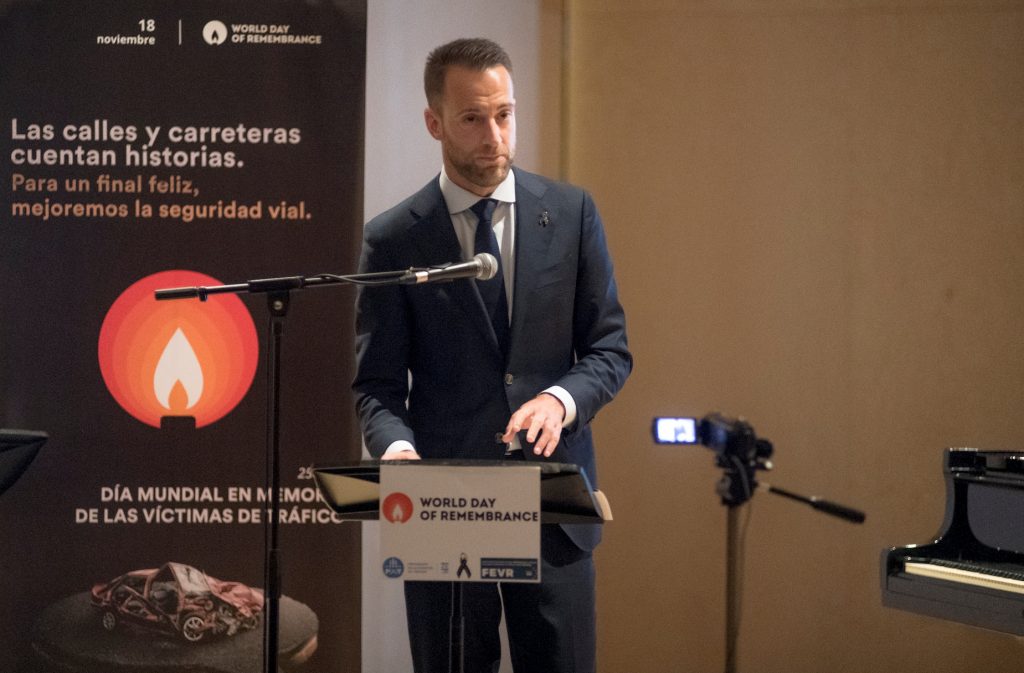 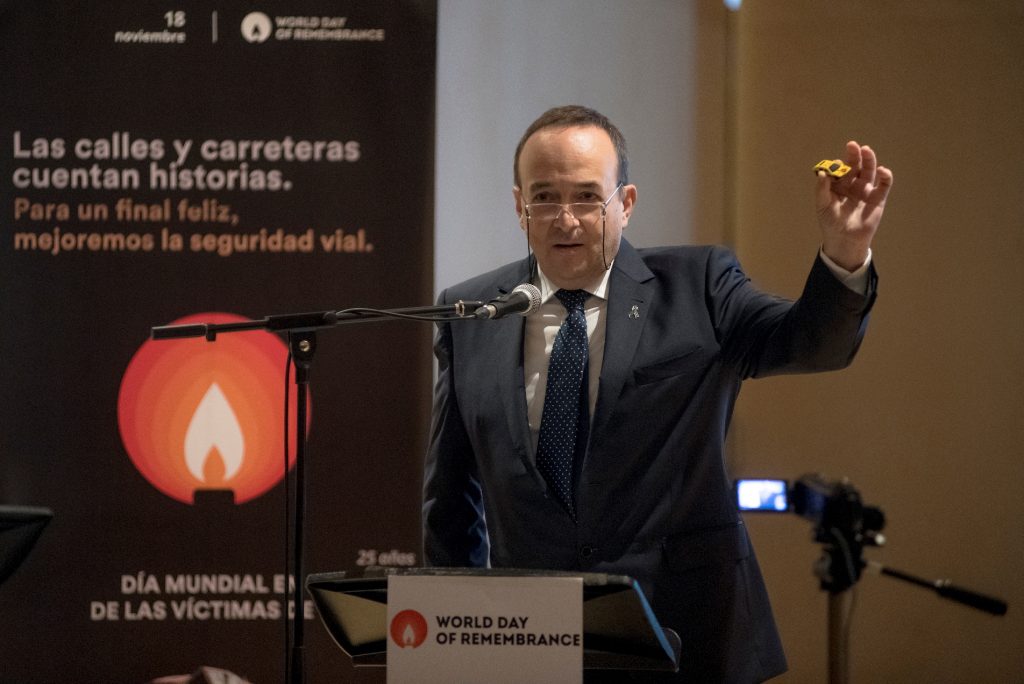 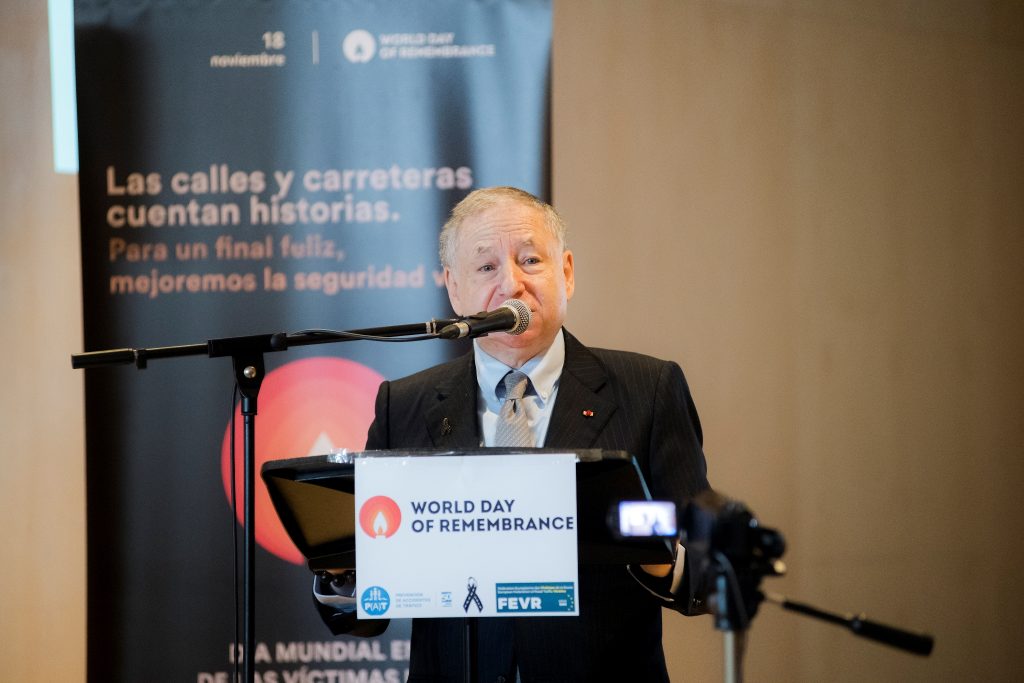 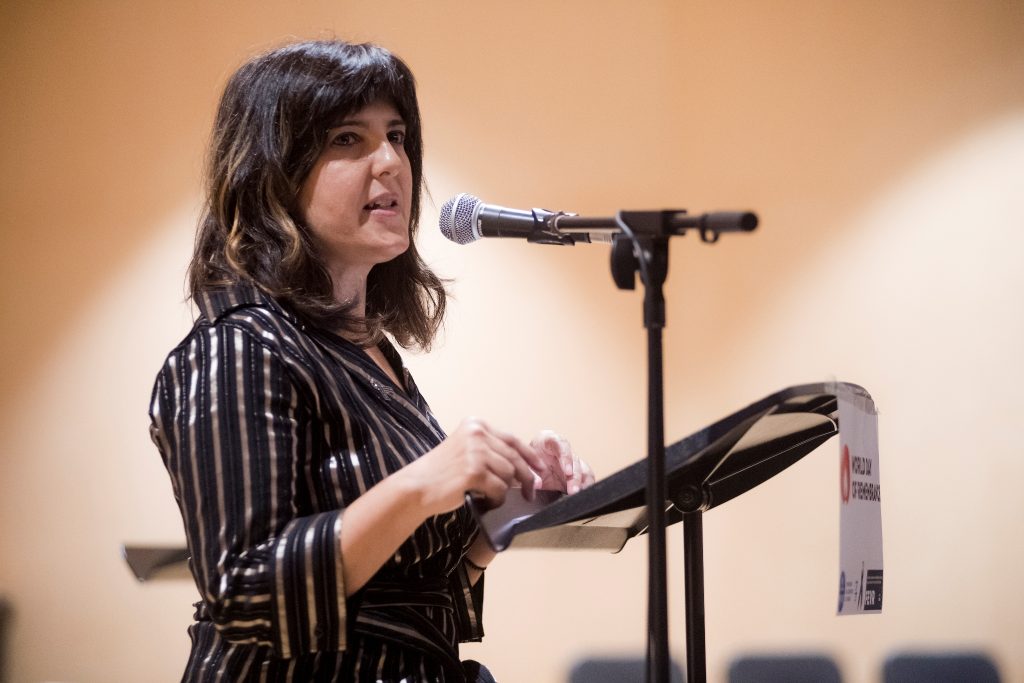 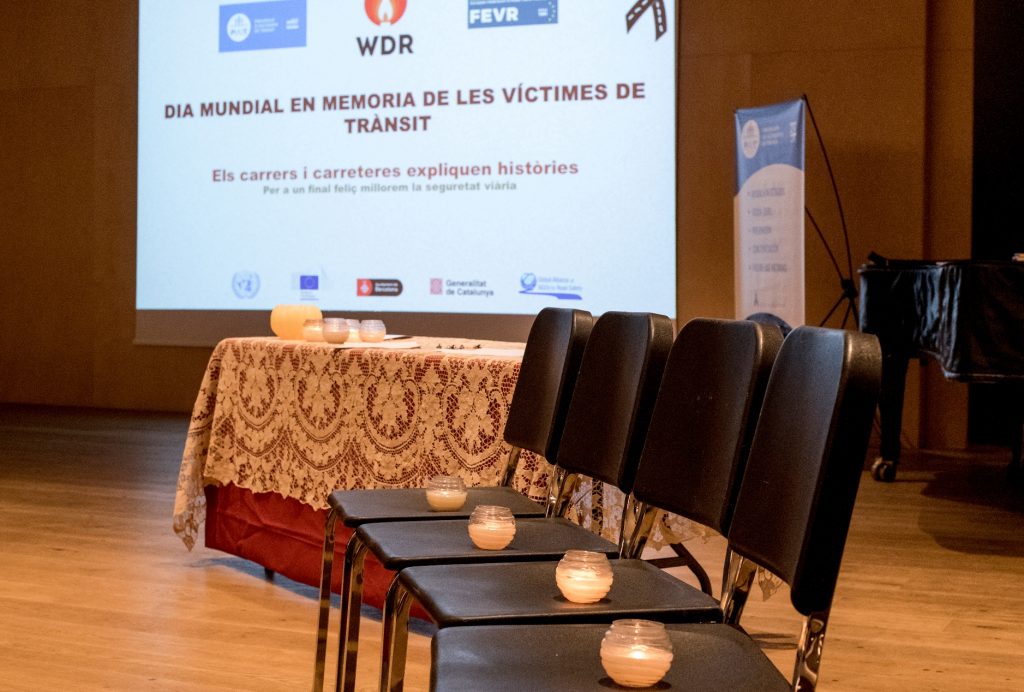 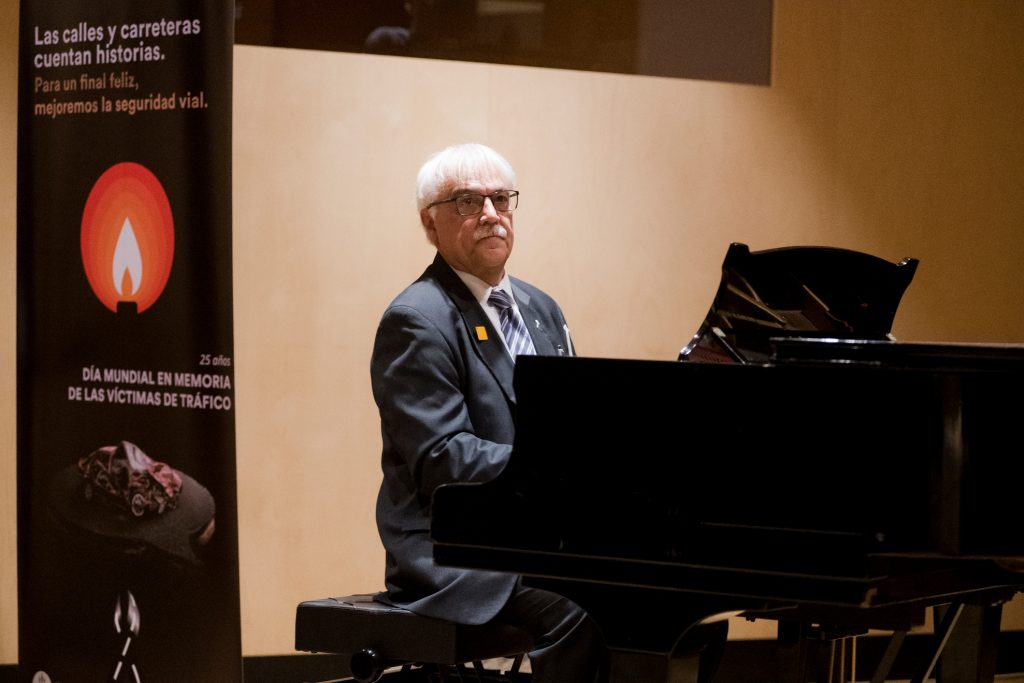 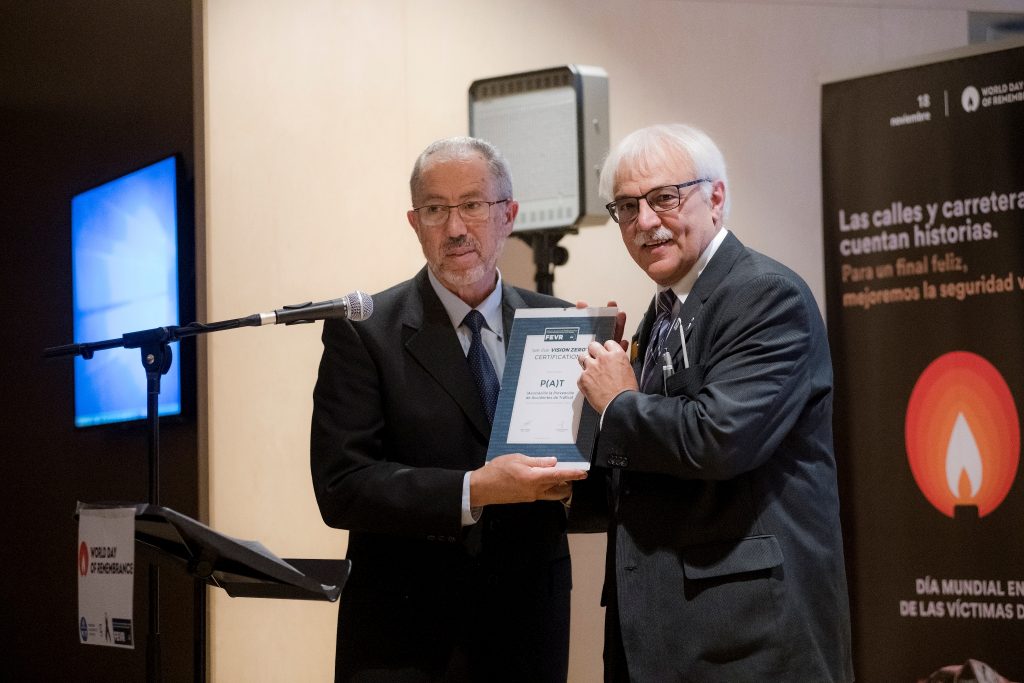 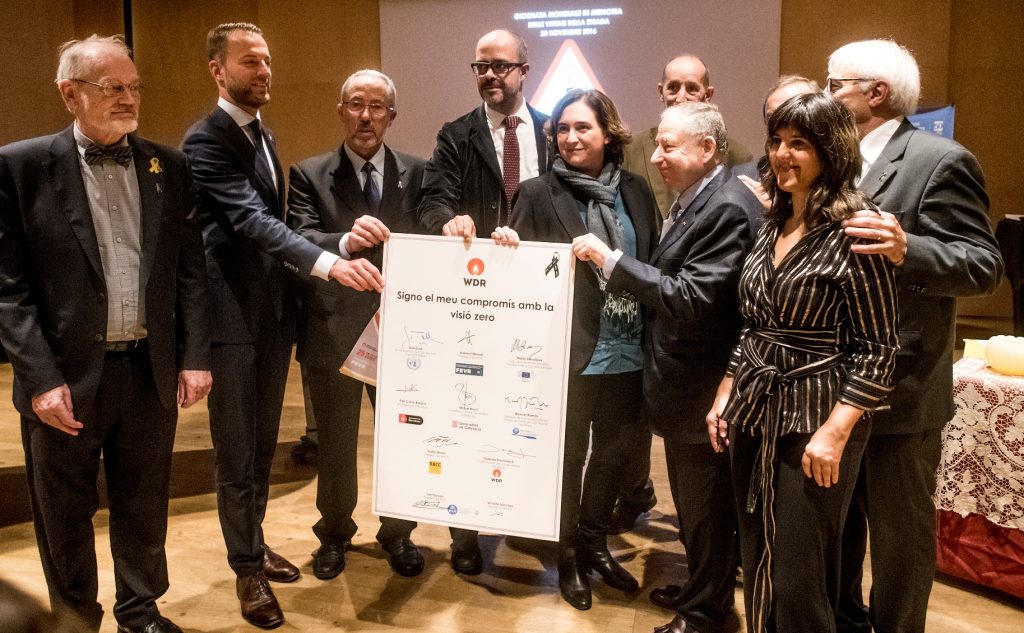