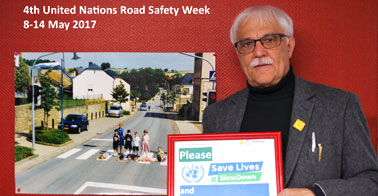 Jeannot Mersch, born on October 1949 in Wiltz, Luxemburg. After secondary school at the Lycée Classique in Diekirch, Luxemburg, he got a diploma as engineer for sound and video at the Robert Schumann Highschool in Duesseldorf, Germany. His father was a policemen (gendarmerie), and he has three brothers, one of them was also active in Luxemburg police. After 2 years of work in a Sound Studio in Cologne he joined the Luxemburgs Philharmonic Orchestra as responsible for their sound recording and music production. On 5.2 1993 a tragic event changed his and his family lives when he lost his 12 years old daughter on her way to school on the zebra crossing close to the bus stop by a speeding hit and run driver . He immediately joined Luxemburg’s Road Victim Association AVR in 1993, where he has been president from 1999-2014. Being FEVR delegate for many years he joined their board in 2004 and followed Brigitte Chaudhry as president of FEVR in October 2010 at the AGM in Rome. He was reelected for a second mandate September 2014 in Ljublijana. In October 2009 he chooses to retire from his professional job to have so more time as volunteer for road safety and victim advocate.