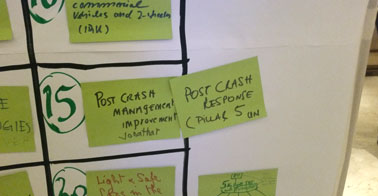 On 28 March, different stakeholders in the field of road safety met with the Presidency, the Commission and representatives from the European Parliament and put forward actions to improve road safety. The participants were given the opportunity to share their knowledge and discuss ways to improve road safety in the Union. The purpose of this meeting was to stimulate a political debate with the aim of taking a political direction.

FEVR was present with an exhibition stand and gave also input to the Stakeholder meeting especially on the topics: LiSa ( Light & Safe ) car, speed reducing ( 30km/h) and post crash response 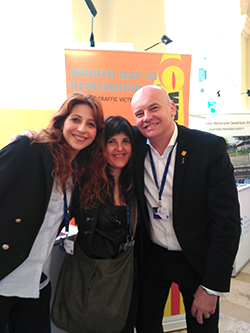 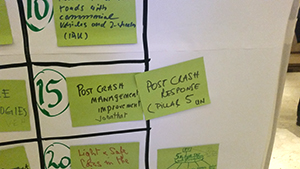 On 29 March, the conclusions and recommendations resulting from the Stakeholders Meeting on Road Safety, were presented to the Transport Ministers

0930 – 0950 Opening statements by Minister for Transport and Infrastructure, Joe Mizzi; European Commissioner for Mobility and Transport, Violeta Bulc; Chair of the Committee on Transport and Tourism of the European Parliament, Karima Delli and UN SG’s Special Envoy for Road Safety, Jean Todt

Closing words by the President of the European Federation of Road Traffic Victims, Jeannot Mersch 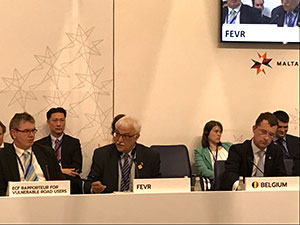 Quote from his speech : “It is the duty and responsibility of us all to save lives and reduce serious injuries because as was said before Road Safety is a human right. I wish all of you the same passion & energy that victims have to help that what happened to them could never happen to other fellow citizens. Thanks to act to reduce further this pandemic on our roads and in our streets”

Recommandations from the Stakeholder Conference

With this declaration, Transport Ministers have agreed to continue to reinforce measures necessary to reduce the number of road deaths in the UE by 2020 from the 2010 baseline, and enhance cooperation between Member States—including relevant authorities, civil society, research institutes and the private sector—in particular with regard to road safety plans and strategies following a risk-based or an integrated approach.

They have also agreed to improve the safety of road users by developing safer road infrastructure, engage with relevant stakeholders on the possibility of expanding and integrating reduced speed limits, such as 30 km/h in high-risk areas, in particular areas where people work, cycle and play, and to continue developing measures to ensure post-collision care, early rehabilitation and social re-integration of road traffic accident victims, in cooperation with relevant public policy stakeholders.

Minister for Transport and Infrastructure Joe Mizzi said that the message is that Europe’s top political leaders from all the EU member states and from the European Parliament, as well as high-level officials of the European Commission and the United Nations, are firmly and collectively committed to significantly reducing the number deaths and serious injuries on our roads. “I can confidently state that road safety is once again at the top of the agenda across Europe,” he said.​

FEVR president said: “We are very pleased that finally now there is a serious injury target set ( by 2030) and also that vulnerable road users where high on the agenda and the Post Crash Item not forgotten”